This blog focuses on one of my great passions …colour. I will bring you tall tales and tid bits about the origins and uses of  colour and how it impacts our world. Colour has held many great powers throughout the ages. It plays many a leading role throughout history. It has been a killer, a saviour and a revolution maker. I thank the pioneers of colour who continue to pursue inventive ways for how colour can improve our lives. It is because of them that we can all be Colour Warriors and stay bright beyond beige. Come join the amazing adventures of colour with me! Why are red and green known as ‘Traditional Christmas Colours’?

Christmas time is the perfect time to parade as much green and red as possible.  It’s tradition, but how did that tradition get started in the first place? The truth to the origins of our Christmas colours is more than a little sketchy but there are a few theories that seem to rise to the surface. Many historians believe the practice of using red and green originates with the ancient Romans. They would hold the celebration of Saturnalia, in honor of the god Saturn. The celebration occurred each year between December 17 and December 23. During the celebration, the Romans would decorate their homes with holly and place small figurines called sigillaria on the boughs of evergreen trees. Over time, the evergreen leaves and red berries came to symbolize the festive and merry season. The Ancient Celts lived hundreds of years ago in what is now Great Britain and France. They were nature worshippers. Many of their rituals were connected with the worship of trees.

The holly plant was revered because it was an evergreen. This plant stayed green throughout the cold seasons and helped keep the world beautiful during the winter. They did not use it to celebrate Christmas, but to mark the Winter Solstice. They did this by decorating their homes with holly, believed to protect their family over the coming year.  They would also wear holly in their hair when they went to watch the Pagan priests cut the mistletoe.
The Romans used holly to make wreathes to represent the crown of thorns that Christ wore.

Mistletoe was considered a gift from the gods for life and fertility as well as a  guardian against evil spirits. In the Celtic language mistletoe means ‘all-heal’.
The Celts believed anything that that grew without its roots in the soil was mystical. The irony is that that this magic is because Mistletoe are parasitic plants. This means that they can only survive by attaching to the branches of a tree or shrub and absorbing water and nutrients from the host plant.  It can only grow if its seeds are left on branches or tree trunks. When the seeds sprout it sends a single root that ends up as a sucker. It enters the host tree and eventually may surround an entire branch. When birds eat mistletoe berries the seeds often stick to their beaks. Rubbing their beaks the seeds fall on to other trees and the mistletoe sprouts again.

So why the request to grab a kiss under a sprig of mistletoe with berries is hung outside the doorway?

Legend has it that when Balder, the son of the Norse goddess Frigga was killed by an arrow made of mistletoe by Loki, an evil spirit, Frigga wept tears of white berries which brought him back to life. Overjoyed, Frigga blessed the plant and bestowed to kiss all who passed beneath it.

The kiss of the mistletoe also represents the kiss of seeds through a bird, of those same seeds onto bare branches, and of roots slipping into tree branches and shoots. Some scholars date the tradition of red and green at Christmas back to the 1300s. Miracle Plays were performed in the Middle Ages in European churches. These were religious plays performed to educate a largely-illiterate public audience, who could not read the Bible.

One popular Miracle Play performed on Christmas Eve was called ‘The Paradise Play’. It tells the story of Adam and Eve in the Garden of Eden. Warned by God not to eat the fruit from the Tree of Good and Evil, they disobeyed and were banished from paradise.

The Christmas period throughout Europe falls in winter. Apples trees bare no fruit at this time, so  the churches would bring in pine trees and fasten apples to their branches to represent the Tree of Good and Evil and the temptation of the poison apple. Over time, people began to duplicate this practice in their own homes, developing the tradition of the Christmas tree with red decorations.

For Christians red and green colours represent the life of Jesus. Christmas marks the birth of the baby Jesus. The green represents the eternal life of Jesus Christ, like that of evergreen trees, they remain eternally green throughout every season. The red symbolises the blood shed by Jesus Christ during his crucifixion.

The first appearance of a modern Santa Claus, complete with what we consider to be the Santa suit was in drawings by Thomas Nast. Nast’s original drawings were of a small Santa who could slide down chimneys. Over the decades Santa would be depicted in a variety of colours such as blue, green and the yellow as pictured in this 1864 edition of Moore’s “A Visit from St. Nicholas”. He was the first to draw Santa wearing a red suit with fur lining, a nightcap, and a black belt with a large buckle.In this later 1881 illustration by Thomas Nast named “Merry Old Santa” the modern Santa character really begins to take shape. Present is the jolly rotundity and the all important red of the suit.

This evolution to a red suit is often mistakenly attributed to the work of Haddon Sundblom, who drew images of Santa in advertising for the Coca-Cola Company since 1931. Although Sundblom’s work certainly changed the perception of Santa Claus, the red suit was shown on the covers of Harper’s Weekly at least forty years before his work for the soda company was published.

Sundblom’s work standardised the form of Santa as we know it today.The type of suit that Santa Claus wears varies. In the United States, he wears a white fur trimmed red jacket and pants with a broad buckled belt, a matching hat and black boots. In European countries such as Austria, with Saint Nicholas still remaining popular, the outfit is closer to that of the saint, being a long robe and a Bishop’s mitre.[5]

> Click here for more info on the evolution of  Santa’s style.

Of course there are no hard and fast rules for colour at Christmas. Many opt for a festive palette that exudes fun and family time.

Here’s some fresh colour schemes from Better Homes and Gardens.

Or check out some funky alternatives.

Red and green might have its history with Christmas but its our personal memories that determine our associations. For most of us at Christmas we are reminded of the joy and excitement we had as a kid at this time and so we have a soft spot for our traditional colours. I have to say these colours also come with other sensory attachments, the smell of pine trees and puddings, the sound of carols and Santa’s sleigh. I hope your Christmas is a bright one filled with the colour of happiness and comfort.

I hope you will join me in 2018 when I bring you more amazing anedotes on the great colour warriors in history and how they impact our lives today!

Merry Kristmas and may your 2018 be a colourful one!
Kind regards, Kristine Ballard 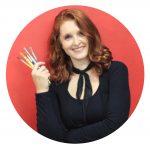